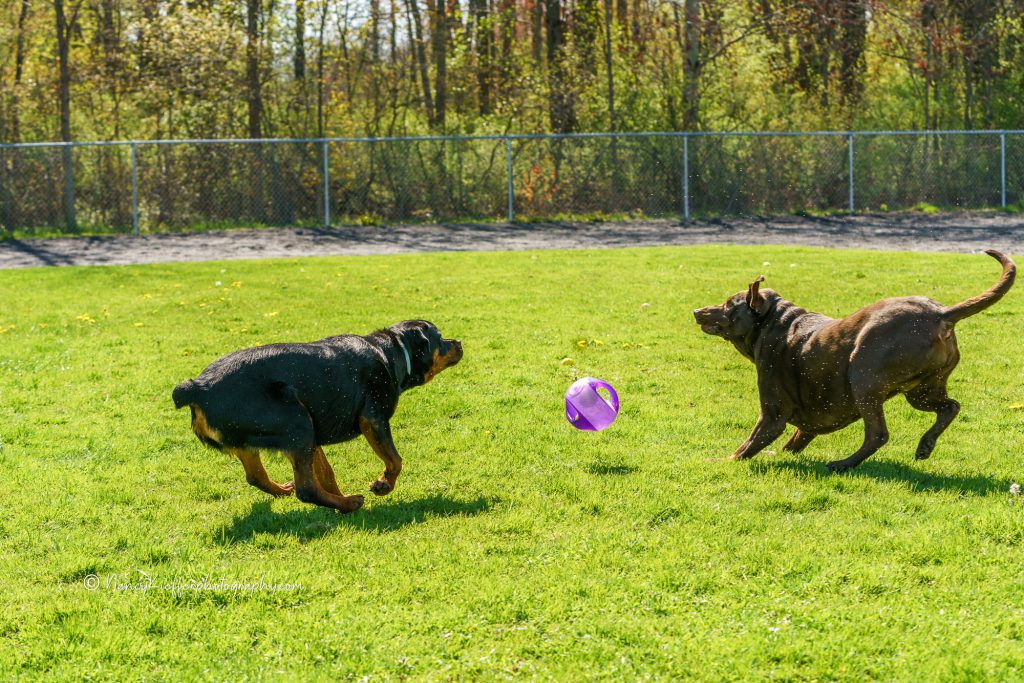 Dog parks are a great place for dogs to socialize and exercise.   In the Syracuse area we have a variety of parks to choose from.  In addition we have several parks that are dog friendly and the locals often refer to them as unofficial dog parks.  This week I decided to explore three of the dog parks near me that playful dogs enjoy.

Wegmans Good Dog park is a large fenced in dog park(40,000 square feet) that has one area for large dogs and a separate area for small dogs.  It is located in a part of Onondaga Lake Park off Cold Spring Rd.  The park is located where the lake connects to the Seneca river.  One patron indicated he enjoyed sometimes getting glimpses of a bald eagle or blue heron while he is  at the park, or walking the nearby trail.  The park includes tunnels and bridges for the dogs to enjoy. I arrived fairly early in the day and the park was being enjoyed by several dogs and owners who clearly shared a camaraderie of spending many mornings with each other and their dogs.  Their dogs enjoyed running around the full length of the yard chasing each other taking turns teasing each other with a small stick.

There were relatively few dogs at the park at this time and I questioned if they come early to avoid the crowds.  They answered that this is the time they like to come as they enjoy the mix of people here at this time, but that the place could be busy even in the early morning hours.  One question I had was if these patrons had any concerns of other dogs which may be unruly.  While they generally did not have a concern in this regard, they did indicate there are occasional patrons arrive that don’t watch their dogs as closely, so these regulars need to keep an eye out for them as well.

One criticism I noted in a review of the park, was that there was no grass. On observation, although the park surrounding the enclosure has lush green grass, the enclosure is mostly gravel with only small amount of grass around the edge of the park.   There does not seem to be a significant area for play in soft grass.

Chapman park is located in the Bridgeport area and borders Oneida Lake.  The Canine corral  also features two enclosures- one for small dogs and one for large dogs.  The small dog enclosure appeared fairly small, but the large one had a good amount of space.  I did immediately note that although the area had a gravel track around the perimeter of the enclosure, it also had nice and soft grassy area for the dogs to run and play in.

The park was being enjoyed by one couple and their two dogs when I arrived.  Kadey was the adventurous one, while Molly seemed to like to stay by my side enjoying a back scratching.  They were soon joined by Aida May, who although she had her own toys, allowed Kadey to be the Alpha dog and enjoy her ball.  The rotary has also provided a chest to store toys that others are willing to share or donate.

This dog park  is located at Jamesville Beach and is a shared space with the beach and picnic area in one area and the dog area at the other end of the park.  The dog area here though, is massive, with tons of area for dogs to run and play but it is also unfenced.

You must have good control of your dog and he must have a good recall or you risk a runaway pet.  This picture indicates about 1/3 of the area of the park.  There is also another field beyond the trees and to the left, there are trails that run down to Butternut Creek where the dogs can run swim and fetch in the creek.  This area would have more risk of ticks than the other two parks, so check your pets carefully when you get home.  Dogs must be leashed in the beach/picnic area of the park and are not allowed during special events as this area of the park is utilized at those times.

While the above three are official Dog Parks, there are a couple other parks in the area that are known to be very dog friendly and the locals tend to gather with their dogs to enjoy some dog socialization.

This Arboretum is a 13.8 acre area of land in the Tipperary Hill section of Syracuse. While the Arboretum was meant to be a museum of woody plants designed for education, it has not been kept up. While the greenery is still beautiful, the grounds are in vital need of restoration. Since it has not been used for original purpose, neighborhood families have found it a wonderful place to sit and relax or to exercise their dogs. You can often see patrons running, walking and playing with their dogs. The Arboretum does have some fencing around the outside, but is in ill-repair and the entrances do not have gates to prevent dog escape. It is also in the city and therefore is subject to leash laws. That said, locals who trust their dogs recall may be found playing there at times.

Elmwood park is a beautiful wooded gem in the Strathmore area of the City. It’s wooded path starts out behind Corcoran High School and traverse through wooded hills and down to a brook. It is again in the city and is prone to leash laws, although dogs may be seen off-leash at times running and swimming in the brook. This was perfect spot for myself and my sister when I first moved to Syracuse. She lived in Strathmore and I lived on South Ave hill. Elmwood park is nestled right in between. We would meet with our dogs in the park and since they were both labs, they loved that water. They could play all day there.

Socialization is beneficial in having a well adjusted dog. Dogs are our “children” and as such we want to ensure their safety just as we would our human children. We also need to be sure they are following the rules, just as we would our kids…not stealing toys, not playing too rough or being a bully with other dogs. General rules for the above dog parks include proof of license and vaccination, keeping dogs under voice control and removing your dog if they become unruly or aggressive.  Owners should not bring a dog to the park if it is in heat. Owners must clean up after dogs and Food ( including dog treats) are not allowed at Wegmans good dog park or Chapman Park.  Wegmans good dog park recommends children under 10 not be allowed in the area, since they are most at risk for bites.

Information from Dr Sophia Yin DVM,MS, pamphlet on Dog park etiquette indicates it is important to train your dogs to interact in games with you and to come when called so that you can prevent situations before they occur. But how do you know that your dog may be getting into a sticky situation? Dr Yin also has a pamphlet on recognizing the body language of fear in dogs. Things to look for in your dog or the playmate is cowering, licking lips, panting, furrowed brow, yawning, being hyper-vigilant of the area, pacing or moving away, or walking slow. If you feel your dog has become fearful of a certain dog or situation, remove him immediately. Many bites occur from a fearful dogs that feel trapped in a situation.

I hope this guide is helpful to you in choosing the best park for your dog and how to keep him safe.

This post is part of circular blog with other Professional Pet Photographers. Our goal is to focus on a particular topic/assignment each week and put our own spin on it. There are photographers from all over the world participating.  Follow the next link to view how the next amazing photographer tackles this weeks challenge.  Follow each link at the end of each blog until you return to me. Then you have successfully completed our blog circle. Enjoy!

Come and find your Best Friend!
Second Chance has a unique program near Syracuse N.Y. where inmates train the rescued dogs. This program gives both the dogs and the inmates a second chance in life.  Appointments currently required related to Covid-19 protocols.

Capture your journey with your pet. Nancy Kieffer is a pet and nature photographer serving  Central New York, the Adirondacks and Beyond.  Capture how you share your life with your pet! It may be a vacation adventure or curled up on the couch. Travel assignments welcomed.

To book a session, Email: Nancy@nancykiefferphotography.com or call 315-469-8807.   Nancy offers instruction in photography and Lightroom.