The recent snow and frigid air may keep some people inside, but a friend and I decided to venture to Taughannock Falls to view the winter-scape. Taughannock Falls is located just North of Ithaca and is 215 ft tall which makes it the highest single waterfall east of the Rocky Mountains.

The falls can be viewed from a lookout just North of the falls, which provides a spectacular view of the small portion of Taughannock creek just before it flows over the waterfall.  On this day, we saw several people (yes, those dots are people) exploring the snow shelf that formed on top of the creek below. 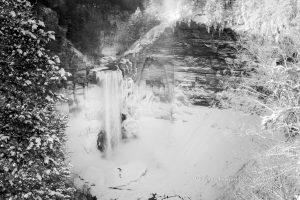 After a brief stop at this venue, we went to the park entrance at the base of the falls and took a short walk into the park to view them from this angle.  While this was a bitter cold day, we were not the only ones in the park.  We encountered families with dogs taking a walk as well as a few other photographers. 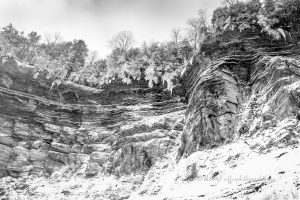 Despite the cold, we had an enjoyable day.